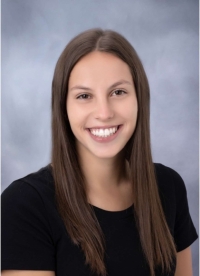 This year, the Village Project (VP) was able to award three Bay Village High School graduates a $1,000 scholarship each. These student volunteers were chosen based on their merits, past experiences at VP, and their essay responses describing how important VP is to the community and to them personally. Scholarships were awarded to Jennie Koomar, Aden Bergstresser, and Emily Terrell.

The Harrell Family Scholarship was awarded to Jennie, one of VP’s long-time volunteers. She has been involved with VP since third grade after her Girl Scout troop started a card making competition at Westerly, which led her to start making cards regularly. Because Jennie started so young, she said the multi-generational aspect is the highlight of working at VP. “No matter how old or how skilled you are, there is always a place for you here. In third grade, I would come over after school and walk Ernie,” she recalled. “I have also worked with someone in the kitchen who has special needs.”

“When I was deciding what to do for my Eagle Scout project, I knew I wanted to do something that meant a lot to me and I immediately thought of VP,” Jennie wrote. “I walked over and found they needed a compost bin. So, I researched how to build one and put my plan into action.”

Jennie says her drive to give back came from her job at VP. “It’s such a loving place,” she commented. “You walk in and there are so many people to talk to. It’s just her own little family there. Overall, it’s such a positive place to be and I love it here.”

The environment and learning experiences that VP has created are truly like no other. Aden, our second fellow, agrees.

“My time at VP has taught me that the most meaningful work is work that benefits others, and I look forward to continuing this legacy of service in my adult life,” Aden wrote.

Aden began volunteering at VP in his third year after his grandfather passed away from cancer. “He lived in Huron, so he didn’t get the VP meals, but some of his friends here were using him, so I did it to honor him,” he said.

One of the things that made her experience so special was being able to cook in the kitchen with her little brother. “He and I started around the same time,” she said. “We never cooked together at home, so it was nice spending time with him.” Aden also commented that the vice president position was by far his favorite volunteer position: “It was really rewarding, I felt like I was really making a difference.”

One of VP’s greatest powers is that it spreads the virus of volunteerism. Emily can attest to that, as she says that she has never been in a volunteer position like hers at VP. “(VP) helped me volunteer,” she said. “I did other things before that, but once I started volunteering at VP, I wanted to do more.”

Emily started volunteering in the garden four years ago. The team there is the tightest VP team for the summer, and she’s at the center of it all. “I knew about the garden because my mom was always in the garden. My neighbor always volunteers there too, so I decided to do it with her.”

Emily has had many unique learning experiences in her time at VP. “I’ve learned so much about so many different things that I feel like I couldn’t learn anywhere else,” she said. “Now I know a lot about gardening and plants.”

She inherited her love of gardening from her grandmother, with whom she has gardened all her life. “I really had a lot of fun being in the garden, especially when we saw animals,” she said. “A couple of times we saw bunnies in the garden.”

The work that is done in the garden is very important to VP in order to provide our customers with fresh and healthy meals.

“Usually we start by watering and then harvesting vegetables, picking flowers, cutting dead plants and weeding,” explained Emily. The flowers that grow in the garden are also delivered to our customers in hand-painted vases to brighten their days.

Emily appreciates this about VP. “I feel that VP is an organization that has really brought joy to those who struggle and I am so grateful to be able to be a part of something that makes a difference. Knowing that the flowers I pick or the beans I pick will go to a patient in need warms my heart.”

Being able to give back to our graduating volunteers is something that warms our hearts and we couldn’t be more proud of them. VP is very grateful for all the help you have given us during your busy years in high school and we are very excited about your bright future.

Jennie will attend Ohio University and study communication sciences and disorders for speech therapy with hopes of becoming a speech therapist. “I definitely want to get involved in CREW, a Christian organization there, some intramural sports and maybe the choir,” she said.

Aden will attend the University of Michigan School of Engineering for engineering physics. “I’m going to try to work on the electric bike racing team at Michigan,” she said.

Emily will be attending Fordham University and is currently undecided on what her major will be. “In college, I really want to do some kind of volunteering,” she said. “I would love to be in a club that has something to do with the Earth, nature or climate change.”

However, as Jennie best put it in her application, “The biggest part of my plan after graduation is to find myself.” Whoever our wonderful volunteers are, they always have a place at VP!